Changing Places Land in the USA 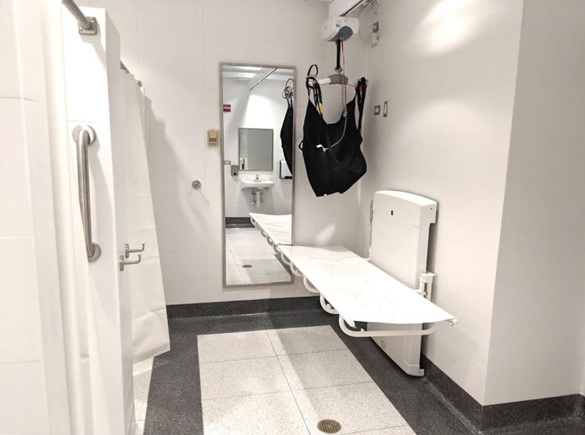 For many people living in the United Kingdom, the campaign for public bathroom facilities which meet the needs of those who require hoists and changing tables; has been active for several years. Yet in the USA this type of idea is still in its infancy. Sabrina Kimball said that it was a tough campaign to get people to understand the need for such facilities. “Space is a premium and the changing places restroom needs space,” she said. It seems that there is also an issue with getting business to understand the need for the hoist as well as the changing table and development of the changing places network within the USA is proving to be a tough campaign.

However, the gains that are being made are crucial, especially with the publicity that has been gained from high profile changing places facilities like the one at Chicago’s O’Hare International Airport. Newly opened last month, the restroom has a roll-in shower, electric ceiling hoist, electric changing table, and an accessible toilet and sink. What is extra special about this restroom is the privacy and dignity that it allows the disabled person who needs to use it. We say this as experienced users of disabled stalls in normal US restrooms that have a foot gap beneath them, allowing not privacy at all.

At O’Hare, the changing places restroom was a collaborative exercise by Mayor Rahm Emanuel’s Office for People with Disabilities and the Airport Advisory Committee which comprised government agencies and advocacy groups.

It is hoped that this is just the beginning for people with disabilities in terms of improved access facilities and that other airports around the country will take Chicago’s lead and follow suit.

In the meantime, Sabrina Kimball who heads up the campaign for changing places in the USA will continue to impress upon state legislatures, the importance of such facilities.